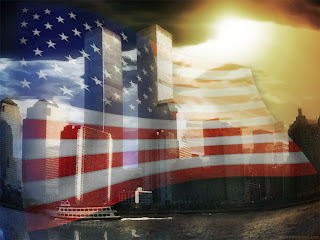 Today marks the 11th anniversary of the worst attack on the United States. I can't believe that eleven years have passed since that tragic day. It is with every post I write every year that I have such a heavy heart. 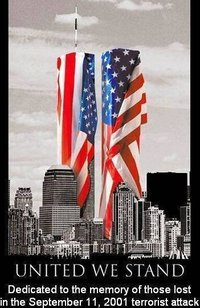 Early on the morning of September 11, 2001, 19 hijackers took control of four commercial airliners (two Boeing 757 and two Boeing 767) en route to San Francisco or Los Angeles after takeoffs from Boston, Massachusetts, Newark, New Jersey, and Washington, D.C. Large planes with long flights were intentionally selected for hijacking because they would be heavily fueled.

The four flights involved were: 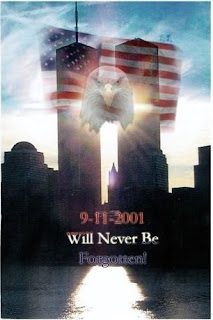 I always include the past post of my experience on that day. You can view it here. Being a New Yorker, we are very resilient and can manage a lot of things that head our way.  I can tell you that nothing prepared us for that day or for anyone else in our country. September 11, 2001 touched every American in some way and it also reminds everyone of the many heroes that are in our lives, that protect us and that are still protecting us every single day. They help to keep a horrific event such as this from ever happening again.

America's Military, Police, Firemen and EMS have done such an amazing job keeping our country safe. Please take a moment to remember the nearly 3,000 men, women and children killed in the September 11, 2001 attacks at the World Trade Center, the Pentagon, and aboard Flight 93. Please also keep our men and women in uniform in your thoughts as they continue to fight for our Nation. Military members and their families have made the ultimate sacrifice for our country since then. We salute you and thank you for your service. America sleeps easy knowing you are there to protect us.

We will never forget the events of that fateful and horrific day in September 2001.

My thoughts and prayers are with those lives lost and families who lost loved ones on September 11, 2001. Thank you to all the first responders from the FDNY, NYPD and the NYARNG (101 Cav, 69th IN, 256 FA) who risked their lives that tragic day. Thank you to all the men and women who defend our freedom by serving in the Military. We will never forget!!

Posted by Crafty Brooklyn Army Wife at 7:00 AM 4 comments:

Email ThisBlogThis!Share to TwitterShare to FacebookShare to Pinterest
Labels: 9/11 Tribute

When my sister "E" was here for a visit I made her fur baby Tracey a coat for cold winter days and nights. She chose the same pattern as I did for Holly's coats here and here. I love the brown fleece against her fur. My fur neice looks so pretty. 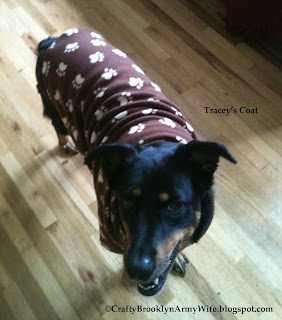 "E" chose the fabric she wanted for Tracey and brought the pattern with her on her visit with us. We sat down together and I taught her how to sew. She learned how to read a pattern, pin and cut the fabric, but, wanted me to sew it.  She sat next to me the whole time I put it together. The good things is that "E" learned an important part of sewing...using a seam ripper. LOL 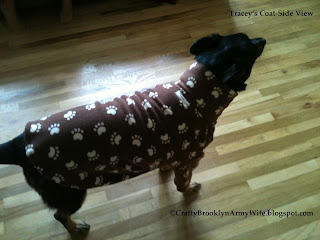 She was so excited when it was done and she ran into "E's" studio to show it to him. I'm so glad I got to sit down with my sister and teach her what I love. I hope she will be inspired.

I am linking up with these parties and TCB.
Have a wonderful evening.