Sad news about our cat Patch 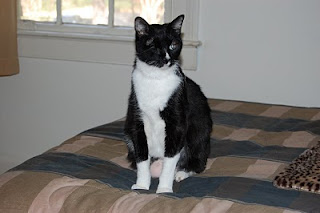 This week has been very difficult...our little one-eyed wonder cat Patch passed away on Monday. We noticed early that morning that he was laying on the floor and not on his bed...yes, he had his own room. E picked him up and told me that he wasn't himself. We noticed that he wasn't eating much lately and doing much of his "business." He called the vet here on post and told them the symptoms and they told him that he couldn't be seen until next Monday (I will rant about this another day). When I got over the shock of the vet office telling us that the post location is a "privilege" for people living on post I nearly lost it. I told E to get phone numbers from them of other vets in the area that would see him that day.

We lucked out with Benning Animal Hospital located off post who said they would see us that evening. When they took his vitals they said that they couldn't get a reading on his temperature and his heartbeat was very slow. The Dr. said he suffered a stroke and he wouldn't make it. As E and I are bawling our eyes out we decided that we did not want him to suffer anymore. We told Patch how much we loved and how much we would miss him.

For fourteen years, he has been my little one-eyed wonder cat. He was my "son", roommate and warming blanket for seven years and when he met E he knew that he was the one for me. When E left for Iraq, he asked me one day "did you put Patch's little pink piggy in my duffle bag?" I said "no" and we realized that Patch had put it in there, so it could be with E while he was gone. The funny thing was that Patch was angry at E when he came home from Iraq. It took a while for Patch to come around, but, we came to the conclusion that he maybe thought that E left him for good. For a while, he wouldn't go near E in a uniform. Patch and E's relationship was so special and I always treasured their special moments together. How he took care of E when he had surgery on his arm, when he was getting brushed E would sing to him "Oh Patchie Boy" (Danny Boy) and he would always give E silent meows.

We know he is in a better place and he will always be with us. We received a beautiful condolence card from the Vet with a this poem in it. 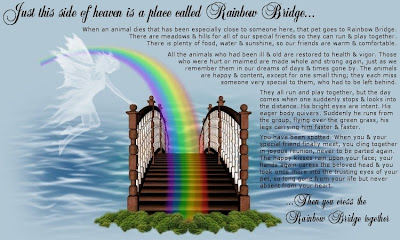 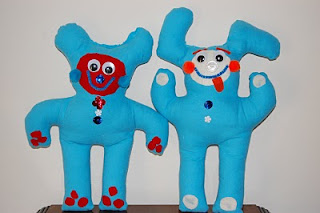 Here are the two creature bean bags I made for my 2 nephews G & M. I had such a good time making these with the class and giving these two guys personalities. It made me feel like a little kid with using flannel,felt, pipe cleaners and pom poms, This past week we made puppets...but, I didn't get a chance to finish mine :-(. As soon as I do finish them - I will post pictures.

This week is "Pajamarama" - it includes pretty much anything to make a successful sleepover party for any child.

Email ThisBlogThis!Share to TwitterShare to FacebookShare to Pinterest
Labels: Activ8 at CSU, Sewing

Today is not just National Flag Day, it also marks the 235th Army Birthday. There will be celebrations around the U.S. today for the two events.


From the Revolutionary War to the current operations taking place around the world, especially Iraq and Afghanistan, the US Soldiers remain Army Strong with a deep commitment to their core values and beliefs. This 235th birthday commemorates America’s Army – Soldiers, Families and Civilians – who are achieving a level of excellence that is truly Army Strong. Being Army Strong goes beyond physical endurance and mental preparedness. It encompasses an indomitable spirit, and high ethical and moral values. These are not only desirable traits in a person, but in a Nation that wishes to live up to the ideals and vision of its founders.

Hats off to Sewing class 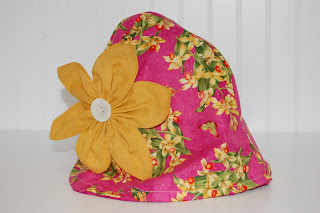 This was my first week working with Sue, my sewing instructor, for the Activ8 program at Columbus State University (where I am currently taking my adult sewing classes) as a part-time Program Aide. There are 2 different sewing classes every week (one in the AM and one in the PM). I really enjoyed working with Sue and the children this week for the "Hats off to Sewing" class. They made 2 different style hats that were absolutely adorable. I also made them both when I came home from work. I just couldn't resist LOL. This is what they looked like. 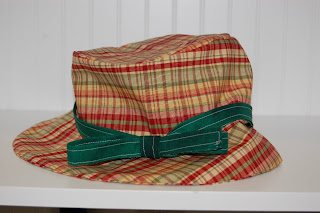 It was so much fun helping them to make sure their machine was threaded correctly, cutting fabric, showing them where to start sewing, where to stop sewing and to "fix" at both ends, seam ripping, seam ripping and seam ripping...did I say I was seam ripping LOL. They had so much fun when they had their "free sewing" time. They would go through the scrap box of fabric and pick out coordinating fabrics to make their little shoulder bags, blankets, doll clothes, etc. I loved their expressions when they would complete something they made and would run over to Sue and I to show us. One girl made an awesome patchwork tote bag with a liner in it. I told her she could be a purse designer if she wanted to. Their ages ranged from 8-14 and it reminded me of being that age and making things in camp. I remember showing it to my counselors and then bringing it home to show my parents and I still remember to this day everything I made.

I am looking forward to this week's class. They will be making "Creature Bean Bags".  Once they are done I will post pictures of those.

Have a great day!!